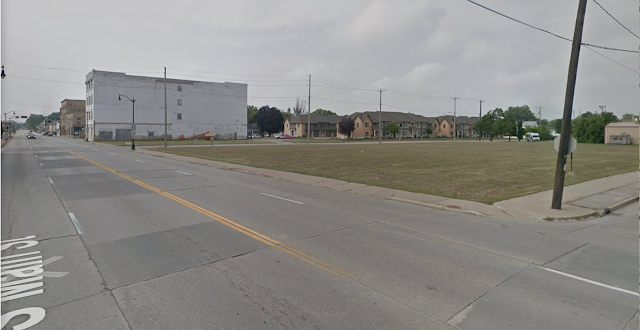 
The city has agreed to sell this contaminated site on South Main Street to a developer for $1.

By Miles Maguire
The city’s Redevelopment Authority has agreed to sell a south-side parcel valued at $150,000 for $1 to a local development company that is proposing to build 60 units of “workforce” apartments there.

Northpointe Development Corp., which is owned by Andy Dumke and Cal Schultz, won out over three other entities that had ideas for the contaminated lot, which is in the 700 block of South Main Street.

Dumke and Schultz are proposing to put almost $11 million into the project. They plan to build a four-story building of one-, two- and three-bedroom apartments to be known as Sawdust Lofts. Dumke was out of the office and not immediately available for comment.

Subsidized rents would start at $385. Nine market-rate units would rent for as much as $975 a month, according to bid documents.

Allen Davis, the city’s director of community development, said the cut-rate price for the property was justified by the potential for the apartment project to serve as a catalyst for future development in the Sawdust District.

He said the RDA board liked the relatively large number of units and their proposed rental rates. “It’s a workforce solution that we need in that area,” he said.

The project would also include three levels of underground parking as well as a plaza that would be available for public use with food trucks or other community events, he said.

The site is heavily contaminated and will require “lots of remediation,” Davis added. The possibility of a subsidy in the form of tax increment financing was not discussed but could come up at a later time, he said.

A TIF proposal and specific building plans would have to be approved by the Common Council, but the sale of the land does not require further review, Davis said.

Thomas Belter, the vice chair of the RDA, said all of the proposals for the site were “very nice uses.” He and Davis said they hope that the other projects will eventually come to fruition under the Sawdust District redevelopment plan, which is expected to be released in a matter of months.

“There is a lot of land across the street and down the street,” Belter said. “So there are alternative sites for some of the other projects.”

The other bidders for the site were:


“There is a lot more land” in the Sawdust District, Davis said. “We’re hoping [Fulbright's] project could land on one of the other sites.”

Although the neighborhood already has one craft brewer, Davis said he could imagine as many as three operating in that section of the city.