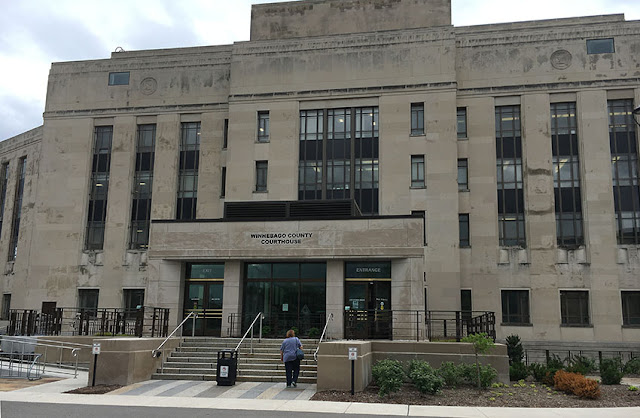 A 29-year-old Oshkosh man was sentenced July 31 to three years probation after pleading no contest to a charge of strangling and suffocating his live-in girlfriend, court records show.

Dillon R. Simmons, a Grand Street resident, was initially charged with five counts of domestic abuse, four of which were dismissed but “read in,” meaning that they could be considered at a future sentencing for another crime. Court costs came to $618.

According to police records, Simmons was arrested June 27. Simmons “forcefully grabbed [his girlfriend] by the neck for approximately three to five seconds, hard enough where [she] could not breathe,” according to a probable cause order. Police had been called to the residence on at least two previous occasions.

The case was heard by Judge Daniel J. Bissett. Matthew Goldin represented Simmons, and Eric Sparr appeared for the prosecution.

An undercover drug buy at the North Washburn Street Kwik Trip has led to 60 days in jail and three years of probation for a 31-year-old Oshkosh man, court records show.

According to a criminal complaint, Avie K. Hannah, of South Main Street, drove to the convenience store around 11:45 a.m. on Aug. 29, 2018, with a woman and young child. When Hannah arrived, he parked at a gas pump and then walked to the south side of the building, police said.

Once there Hannah exchanged two baggies of heroin for $180 with a confidential informant who drove up and who was working with the Lake Winnebago Area MEG Drug Unit, police said. Hannah pleaded no contest.

The case was heard by Judge John A. Jorgensen. Steven Smits represented Hannah, and Anthony Prekop appeared for the prosecution.

A Doemel Street man pleaded no contest July 29 to a charge of receiving a stolen gun and was sentenced to 18 months probation.

Jacob A. Hewitt, 24, told police he traded for the gun with a young woman he knew and that he planned to sell it for cash, according to court documents.

Court fees of $528 were assessed. The defendant was ordered to undergo drug and alcohol assessments and maintain absolute sobriety.

The case was heard by Judge Barbara Key. Daniel Muza represented Hewitt, and Amanda Folger appeared for the state.

When Oshkosh police arrived at a Ceape Avenue address on April, they expected to deal with a report of someone putting methamphetamine in someone’s dog food but instead came across a sawed-off shotgun.

James E. Gwinn, now a resident of Boyd Street, pleaded no contest July 31 to a charge of possession of the illegal weapon. The 29-year-old was sentenced to 12 months’ probation. Court fees of $518 were assessed.

Police said they found the weapon in a closet “with a barrel that had clearly been sawed off.” They said Gwinn acknowledged modifying the weapon and also to having a stun gun, for which he did not have a conceal-carry permit, and to owning a duty belt described as “almost identical to what law enforcement” uses.

According to court papers, Gwinn made the belt “to wear for his protection as someone gives him some problems at Salvation Army.”

Gwinn initially was charged with possession of electric weapon, but that charge was dropped. He pleaded no contest in May to a misdemeanor weapons charge.

The case was heard by Judge Scott C. Woldt. Steven Smits represented Gwinn, and Adam Levin appeared for the state.