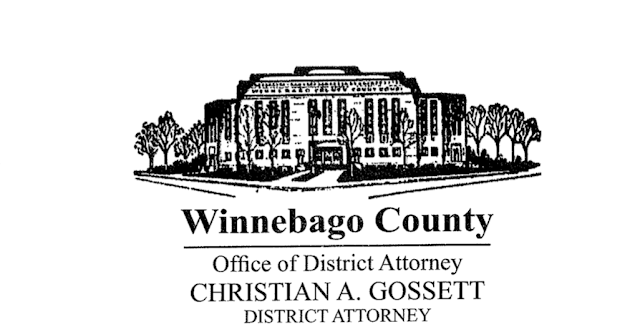 Scott A. Ceman, the deputy district attorney for Winnebago County and the lead prosecutor for violent crimes, has resigned his position, citing the chronic problem of low pay for public lawyers in the state's criminal justice system.

"I can no longer justify staying in a job I love while my family goes without," Ceman said in an interview. Last year he earned $69,820, after 14 years in the district attorney's office, where he supervised eight other prosecutors.

By contrast, Oshkosh patrol officers, who do not need to have a college degree, can make up to $71,000, according to the city's website.

In a letter to Gov. Tony Evers and Rep. Gordon Hintz, Ceman explained why he had tendered his resignation. "This is a profession I simply can no longer afford to be a part of."

Ceman is a veteran of the U.S. Army who grew up on a farm and spent seven years as an ironworker. "I appreciate first-hand the struggles of good, working-class people because I've been one my whole life," he wrote.

He said he recognized that many citizens do not have much sympathy for state prosecutors and public defenders.

"Admittedly, back when I was an ironworker, I could have cared less how much they made," Ceman wrote. "However, having prosecuted numerous intentional and reckless homicides and sexual assaults of adults and children, kidnappings, human trafficking and all sorts of other violent and serious crimes over the years, I can attest that when someone's loved one is charged or falls victim to these types of crimes, they suddenly care, as they should."


Ceman, who has three children, said he will open a private practice next month, focusing on criminal defense and general litigation.

He said his work in the county has been "very rewarding." He cited accomplishments such as working on a child abduction response team and an elder abuse task force as well as shutting down the old Naughty Girls strip joint on Jackson Street.

But "at some point ... you have to put your family first," he said.

The problem of low pay for prosecutors and public defenders is not a new issue. But with the Democratic governor and Republican-controlled legislature at an impasse on spending issues, the outlook is unclear for any resolution.

District Attorney Christian A. Gossett was not immediately available for comment. Hintz's office did not respond to a request for comment.

Below is the complete text of Ceman's letter:

RE: Prosecutor and Public Defender Compensation

Today, after 14 years of service to the State of Wisconsin, first as an Assistant District Attorney and for the past 9 years as a Deputy District Attorney, I tendered my resignation to the Department of Administration. While it has been my profound honor to serve as the supervising attorney and head of the violent crimes unit in Winnebago County these past 9 years, this is a profession I simply can no longer afford to be a part of.

Last year, my State wages as the supervising attorney of 8 Assistant District Attorneys were $69,820. I appreciate that to many people this is a good living. I spent 7 years as an ironworker after being honorably discharged from the Army and before going on to law school. I appreciate first-hand the struggles of good, working-class people because I've been one my whole life. However, the enormous debt incurred by those who choose to obtain a juris doctorate degree equates to a second mortgage that many, including myself, carry for 25 to 30 years.

State prosecutors and public defenders are not eligible for student loan forgiveness programs. We're not afforded the opportunity to argue for comparable pay with other government attorneys. On one hand, representatives support pay progression, but on the other hand, refuse to fund it. In the end, this amounts to state prosecutors and public defenders having to choose between their careers and their families. I choose my family.

I fully appreciate that there's not much public sentiment or sympathy for state prosecutors and public defenders. Admittedly, back when I was an iron worker, I could have cared less how much they made.

However, having prosecuted numerous intentional and reckless homicides and sexual assaults of adults and children, kidnappings, human trafficking and all sorts of other violent and serious crimes over the years, I can attest that when someone's loved one is charged with or falls victim to these types of crimes, they suddenly care, as they should.

It takes years of training and experience to develop attorneys into homicide and sexual assault-level prosecutors and public defenders. Unfortunately, the current pay structure in the State of Wisconsin for these highly educated and dedicated professionals discourages attorneys from staying in these careers long enough to become proficient in handling these crimes. I would encourage any recent law school graduate to pursue a job in public service, but only for a couple of years. I will likely be replaced by one of these recent graduates. However, I would also warn them to take their 2 years of experience and leave before becoming trapped in a career that is not sustainable should they ever choose to purchase a home or start a family.

There's never a good time to leave this profession. There's always that one open case that you have developed such a connection with that you feel compelled to see it through. However, at some point you just have to say "enough" and put your family first for a change. As I step down, I leave behind 3 open homicides of children. Shaken Baby/Abusive Head Trauma cases are the most difficult cases to prosecute and defend. Aside from the personal toll they take on those of us who work these matters, they involve highly complex medical and forensic evidence. Therefore, I truly wish whoever the recent law school grad is that takes over my caseload the very best of luck.