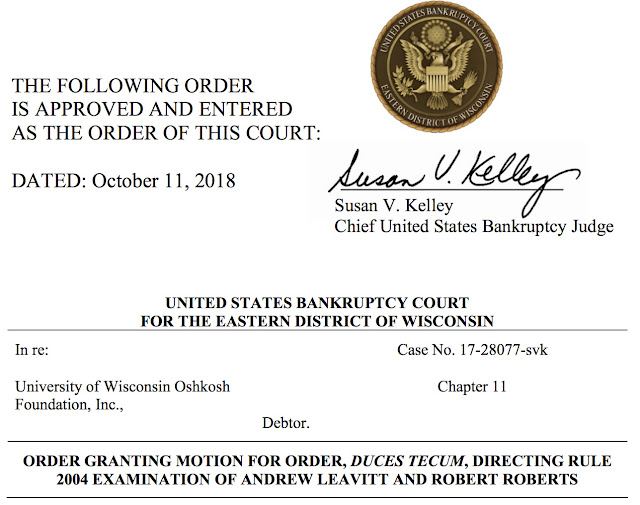 A federal judge has ordered UW Oshkosh Chancellor Andrew Leavitt and an aide to submit to questioning by attorneys for the school’s long-established foundation, who say the two university officials have been working to interfere with pledges that were made to pay for the Alumni Welcome and Conference Center.

But state lawyers have moved to block the exam, arguing that the judge’s order is too broad and would interfere with the university’s efforts to raise money through its new foundation.

The standoff between the two foundations comes at a time of increased financial distress for the university. State records show that UW Oshkosh lost $7.1 million in the last fiscal year, after losing $10.3 million in the prior 12 months. The school has announced a plan for “right-sizing” that will mean job losses as well as increased workloads for many remaining staffers.

Meanwhile the UW Oshkosh Foundation is sitting on $22.5 million in assets but is locked in a legal battle with the UW System. With the permission of the bankruptcy court, the foundation has been processing significant sums in the form of scholarships, almost $800,000 in September alone, according to a foundation board member.


But the foundation is largely in a wait-and-see mode for providing other kinds of university support as legal disputes play out in numerous state and federal courts. Historically the foundation’s board members have been successful business leaders and influential members of the local community, and they are unhappy about the university’s decision to step up separate fundraising operations.

“We are obviously disappointed in view of our record,” said Tim Mulloy, a retired insurance executive who serves as the foundation's board chairman. “Not one penny of the endowment funds or donor funds have been used for bankruptcy.”

The foundation is continuing to receive “periodic donations and bequests,” he said. Legal and other fees are being paid out of revenues that would otherwise be available to support the university, he said.

“It will only confuse donors to have two entities raising money,” he said. “That’s unfortunate.”

If the judge’s order stands, Leavitt and Roberts would be questioned under “Rule 2004,” a section of the U.S. Bankruptcy Code that is intended for “discovering assets, examining transactions and determining whether wrongdoing has occurred,” according to a phrase that appears in multiple bankruptcy rulings.

Kelley said Leavitt and Roberts will be questioned in both their official and personal capacities starting on Nov. 12, with the examination continuing “from time to time until it is completed.”

By Oct. 25 they are also expected to turn over documents related to the creation of the new foundation as well as correspondence they may have had with donors who had pledged money to the alumni building.

Lawyers for the UW Oshkosh Foundation say that Leavitt and Roberts acted to divert pledges to other entities. In one case, they say, Leavitt told a UW Oshkosh donor to send a gift to UW Madison’s fundraising arm.

The UW System and its officials have adopted a policy of not commenting on ongoing litigation and declined to comment for this story.

The UWO Foundation says that its reorganization and eventual emergence from bankruptcy is predicated on donors making good on pledges that were promised years ago. If these donors either withhold their pledges or make them to the Titan Alumni Foundation, it will be harder to satisfy creditors, the foundation said in court papers.

The state’s position is that the university should be free to raise money on its own and the UW Oshkosh Foundation has no right to learn about the internal operations of UW Madison’s foundation or of the Titan Alumni Foundation.
on October 18, 2018