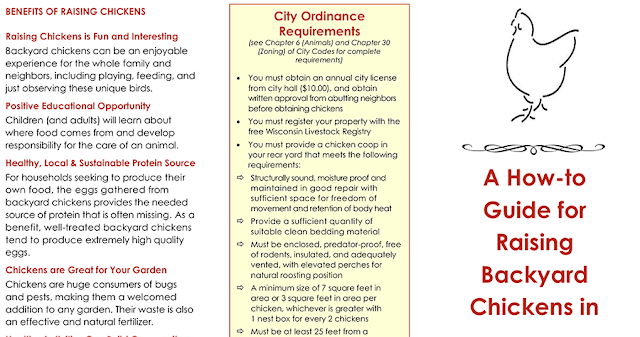 The city of Oshkosh is looking to make some changes to its beekeeping and chicken keeping ordinances in response to residents’ increased interest in both hobby areas.

The new changes include reorganizing the chicken keeping ordinances to make them clearer residents as well as changing consent requirement to requiring notification of adjacent property owners.

Changes to the beekeeping ordinance include changing a graphic of the required flyaway barrier and a change to the text in the ordinance in addition to the new graphic ensuring they both match each other.

Steven Wiley,  an assistant planner for the city, said the committee has had more citizens approach them requesting approval for licenses of bees and chickens.

“Changing the consent requirement to requiring notification would help the process for some residents and bring the chicken ordinance in line with the current bee ordinance,” Wiley said. “The revisions to the organization of the chicken ordinance should make the chapter of the code easier to navigate.”

Wiley said there are no proposed changes for penalties in the municipal code and are working to create the changes to bring to the common council.

“These changes have been approved by the Sustainability Advisory Board for recommendation to the Common Council,” Wiley said. “We are still working on some of the text amendments so are not quite sure yet when we will bring the changes to the council for consideration. Once council takes action the changes would take effect basically the week after that council meeting.”
on July 13, 2018