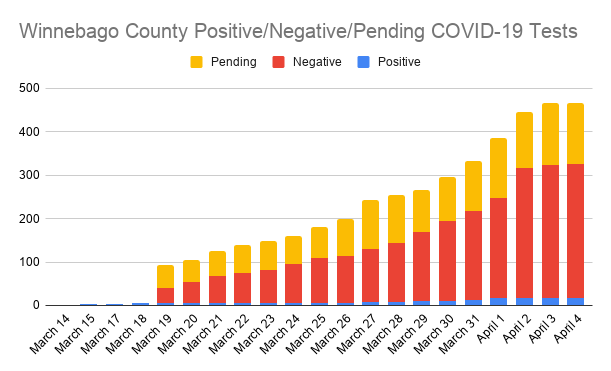 Three more Winnebago County residents have tested positive for COVID-19, bringing the total to 21 as of Sunday evening.

Eleven are male, and 10 female.

The county said the count does not include data from the city of Menasha or the city of Appleton, which both extend into other jurisdictions.

Separately the Wisconsin Department of Health Services reported a statewide increase of 155 cases to a total of 2,267. A total of 68 Wisconsin residents have died from COVID-19 as of Sunday afternoon, an increase of 12 from the day before.

Police called to 14 locations for social distancing
The Oshkosh Police Department issued 14 warnings Saturday to encourage residents to adhere to the state’s “safer at home” order. This was the largest number of warnings given out on a single day since Gov. Evers urged citizens to stay indoors and away from large groups on March 25.

Social distancing measure remains at “C”
As of Sunday Winnebago County residents have maintained a “C” grade for social distancing, according to an analysis from Unacast, a company that specializes in GPS-based location data.

Schraa volunteers as poll worker
Rep. Michael Schraa, whose 53rd Assembly District wraps around and takes in parts of Oshkosh, said Sunday that he plans to volunteer as a poll worker for Tuesday’s spring election.

His announcement, described on his Facebook page, comes as Oshkosh Mayor Lori Palmeri has joined with mayors from around the state in calling on the Evers administration to stop in person voting in the face of the COVID-19 pandemic.

“We implore you to implement all emergency measures necessary to control the spread of COVID-19, a communicable disease,” reads the text of the letter as posted by WBAY. “Specifically, we need you to step up and stop the state of Wisconsin from putting hundreds of thousands of citizens at risk by requiring them to vote at the polls while this ugly pandemic spreads.”

Schraa, a Republican, said he was not “the least worried” about serving as a poll worker, although he also said that everyone working “will be taking extreme cautionary measures to stay safe and keep the public safe.”

According to Schraa, “All of my family is compromised in some way. Yet, I feel comfortable enough to sit at the town of Oshkosh for [seven hours] and help.”

Poll workers will be “regularly washing and sanitizing our hands. Many people will elect to wear face masks,” Schraa said.

“Our election process and responsibility is something every American should never take for granted and we should all strive to do our duty and make sure people are allowed to vote for their representation,” he added.

Palmeri and eight other mayors, representing more than 1 million residents, disagree strongly about the safety of in person voting. “We believe it would be irresponsible and contrary to public health to conduct in-person voting throughout the state at the very time this disease is spreading rapidly,” their letter says.
on April 05, 2020 No comments:

The Oshkosh Examiner has been named a finalist for online public service reporting in the 90th annual Excellence in Wisconsin Journalism competition sponsored by the Milwaukee Press Club.


The Examiner was cited for “The Coroner Who Conned a County,” a series of articles that examined the erratic behavior, including allegations of sexual misconduct, of former Winnebago County Coroner Barry Busby. The articles, reported and written by Miles Maguire, led to an investigation of Busby by the Board of Supervisors, Busby’s resignation and a decision by the county to adopt a new approach to reviewing suspicious or unexplained deaths. Many of the articles also appeared in the Oshkosh Herald.

The Milwaukee Press Club describes itself as “the oldest continuously operating press club in North America.”

“This year’s contest drew more than 750 entries from throughout Wisconsin in professional and collegiate categories,” MPC said in a press announcement. “The competition was judged by professional journalists from press clubs throughout the U.S., including statewide clubs in Alaska, Arizona, Florida, Idaho and Southeast Texas and metro area clubs in Dallas, Cleveland, Houston, Los Angeles, New Orleans, Orange County, San Diego, San Francisco and Syracuse.”

Award winners will be announced at the annual Gridiron Dinner, which has been postponed because of the coronavirus pandemic.

The other finalists in the online category are Urban Milwaukee and Wisconsin Public Radio.

Oshkosh has three finalists in the collegiate category, all students who work at WRST-FM, the campus radio station of UW Oshkosh. They are Max Fredrick and Gideon Patrick, for their podcast “Script to Screen,” and Joseph Schulz for “UWO Red Zone Initiative,” for best news story.

Schulz has been a regular contributor to the Examiner.

James Fitzhenry, a former editor of the Oshkosh Northwestern who is now vice president for news of the USA Today Network - Wisconsin, is a member of teams that are finalists for best use of multimedia and best documentary.
on April 05, 2020 No comments:

Another Winnebago County resident has tested positive for COVID-19, bringing the total to 18 as of Saturday evening.

The number of negative tests rose to 307, an increase of seven from the day before, according to the county Health Department.

Ten are female, and eight male.

The county said the count does not include data from the city of Menasha or the city of Appleton, which both extend into other jurisdictions.

Separately the Wisconsin Department of Health Services reported a statewide increase of 196 cases to a total of 2,112. A total of 56 Wisconsin residents have died from COVID-19 as of Saturday afternoon.

Social distancing measure remains at “C”
As of Saturday Winnebago County residents have maintained a “C” grade for social distancing, according to an analysis from Unacast, a company that specializes in GPS-based location data.